Berserking Your Way to Glory

With the right gear, Berserk tokens can offer a one-stop solution for damage, healing, and critical damage. Enjoy it while you can.

Author’s Note: I’ve debated publishing this topic up for a while now, but eventually the cat was going to get out of the bag. Between a few popular videos and the curiosity of a few players, this was eventually going to become widely known. So I’ve decided to release it.

Why the indecision? Because this isn’t really the way Neocore wanted berserk to be. Understand that berserk has been in its current state for a while. Or rather, it was even more ridiculous: there was no cap on tokens. Everything I describe below was possible before the patch, but with effectively infinite tokens, if you were patient enough. During the period leading up to the seasonal patch, there was a long discussion about the right way to bring this in line with other effects. As a stop-gap, a 150-token cap was put into place. Around that time, Neocore ran into some internal issues that caused work on balance issues to get delayed. In order to get seasonal content into the hands of players, the patch was released as it was, including the 150-token cap. So the version of berserk that you see today isn’t the end state they wanted.

Berserk will be re-balanced. It’s unclear what the future will hold for it, but it’s almost certainly not staying as is. That said, as long as it’s here, there’s no sense in trying to keep it a secret. So read on, and enjoy berserking in its current form while it lasts.

The Basics of Berserk

Berserk is a token-based battle state, which means that the player gains certain benefits while they have at least one stack of the berserk buff and additional benefits for each stack. The benefit of being in the berserk state is a 10% bonus to movement speed (soft-capped), and each additional token gives 1% damage and 1% damage reduction (soft-capped). A player can have a maximum of 150 berserk tokens, and they will slowly lose 1 berserk token every second.

Berserk tokens are not something you come across naturally. They are only granted from specific enchants which appear only on relic, archeotech, and ancient items. Unlike enrage tokens, berserk tokens only come from being hurt or from a massacre. This means that unless you’ve specifically collected a few pieces of gear to exploit berserk tokens, it’s very likely that you either thought they weren’t very good or simply too hard to get.

The benefits of berserk tokens are not particularly noteworthy in and of themselves. The damage reduction can be good (which we’ll discuss later), but for the most part, berserk tokens really only become strong when paired with a good deal of specific gear. This section describes some of those sources and their trade-offs.

As a shameless plug, if you are planning to build around berserk, I would highly recommend that you leverage the Enchant Viewer to find the gear discussed in this section. Use the text filter to search for “berserk”, and enable both relic and archeotech items.

If you are going to build around berserk, the first thing I’m going to recommend is that you take the Radical morality path. This choice unlocks the Radical perk, which is decent for berserk builds. It also has the benefit of increasing resource regeneration, which is useful for a number of builds. Most of your tokens, however are going to come via item enchants, so we’ll focus there.

There are only four enchants which give berserk tokens:

Of these, the first is by far the strongest. Massacre effects are not uncommon, but refreshing a massacre does not provide additional tokens, so its benefit is limited. The exposed state (<=25% HP) is a riskier play-style, and it’s hard to control without killing yourself. The seasonal one is finnicky, and I have not seen it used. So that leaves us with getting hit in order to get tokens.

This enchant only appears on relic items in the belt and inoculator slots or on an ancient weapon “Of Insanity”. Specific relic items are far easier to obtain than archeotech items, because you can reroll the relic enchant. So in a pinch, just grab the highest-level item you can and spend some sparks. That will get you off the ground.

Also, understand that you must actually lose the HP in order to gain tokens. This means you need to plan on being hit, and you’ll need a plan to regain a lot of HP quickly (more on that later). Deflecting or dodging damage or being invulnerable means no tokens from those hits.

Here’s where things start getting fun. Several item enchants exist which give a damage buff for each berserk token. Because the cap for berserk tokens is 150, each of the damage bonuses on these enchants is multiplied by 150 when you’re capped. This means a bonus of just a few percent makes a massive impact. There’s just two enchants you’ll care about:

The first enchant only appears on relic-quality signums, but it does stack. The range on the damage bonus is 4% to 6% per berserk token at all levels (it’s still good to have a max-level item due to primary and secondary enchants, but a low-level one will carry you a long ways). With a bit of re-rolling values, it’s not terribly difficult to get 5.8-6%. At max strength, max berserk stacks, and two signums equipped, this provides 1800% increased damage. This amount of damage is enough to effectively turn a -95% mission into a 0% mission assuming you have no other damage bonuses equiped. It is very strong.

The second enchant appears only on archeotech-quality belt items, main implants, and signums. It’s important to note that this enchant, like its cousin the enrage version, does not break the critical hit chance soft-cap (so it will only take you to 50%), and critical strength hard-caps at 150. This single enchant will soft-cap you on both critical hit chance and critical strength. Even with the minimum enchant value, it only takes 75 berserk stacks to maximize its effect, so you only ever need one item with this enchant. Because two out of the three slots that it rolls on compete with other powerful enchants, the ideal slot is a main implant.

Survival is fundamentally made up of two things: reducing incoming damage, and healing back up. While berserk provides 1% damage reduction without any extra gear, it is still limited by the soft-cap (60%), so all this really buys you is a cheap way to cap your DR without any investment. Whether you like being under the cap so that it’s easier to build up the first few berserk tokens or you prefer playing it safe and always being capped, I leave the choice to you.

What I’d like to talk about is healing and how berserk stacks can provide basically as much as you’d ever want. There are really just two enchants to consider:

These are both phenomenal enchants, and while the difference is primarily in playstyle, there are a few details to be aware of. First, the maximum value of either enchant is 16.6 at level 90, which means just under 2500 HP, either per hit or per second. Second, the HP-per-hit enchant only appears on archeotech items in the belt, main implant, and signum slots, which means that not only is it a bit trickier to acquire, but it also competes with other valuable enchants. The HP regeneration enchant is available on relic-quality purity seals and inoculators. Third, both enchants stack, and you can technically have both going at the same time (though typically you won’t need that much healing). Finally, I’ll note that if you’re going the regeneration route, be aware that the Artificial Organs II perk does not currently work with HP regeneration from gear. This is a bug, but by the time it gets fixed, berserk may in for a rebalance.

All berserk-related item enchants are relic enchants, meaning they only appear as the first enchant on relic, archeotech, or ancient items. Unfortunately, because of their limited availability, this means they compete with each other for slots. I’ve laid out a plan below for what I consider an “optimal” allocation for slots. This allocation attempts to put item enchants where they are not competing with anything else first (crit on main implant or regen on purity seal), then filling the rest of the more crowded slots with enchants that cannot be put elsewhere. 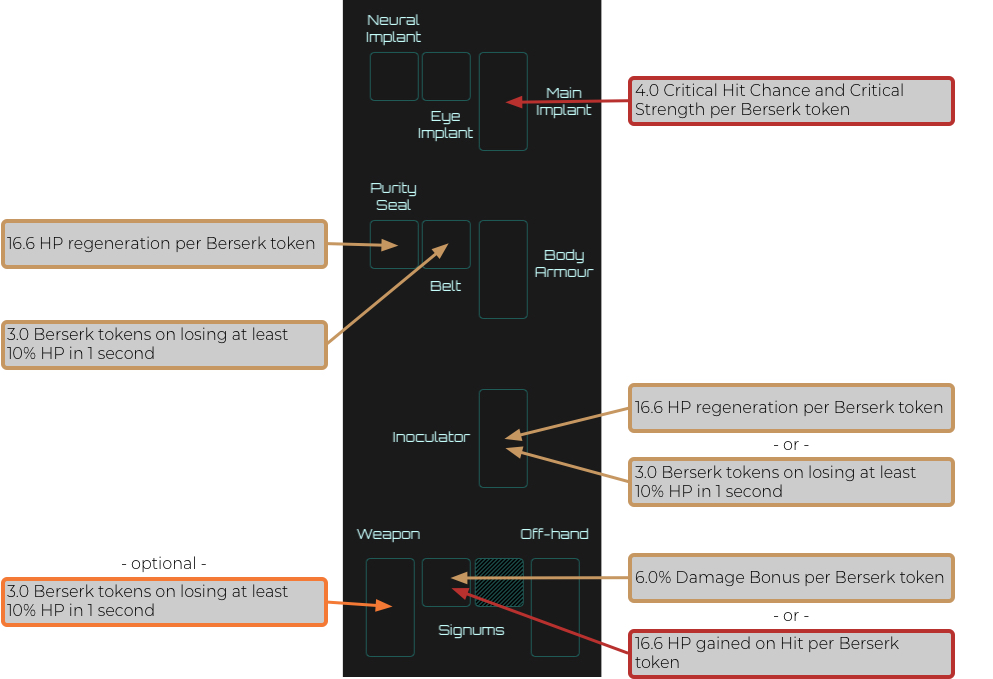 I do want to emphasize that there are many ways to plan a berserk build. You don’t need all of these enchants, you don’t need them in the same spots, and you definitely shouldn’t treat this layout as the One True Way to leverage berserk tokens. Feel free to pick and choose from token-generation, damage buffs, and healing as it fits your character and your goals.

One of the first things you’ll notice playing a berserk build is that you need to ramp-up before getting a mission underway. Without a hefty amount of tokens, you’ll have much weaker damage and no substantial healing, leaving you hamstrung. Usually, this means you’ll be standing around near the beginning of the mission and taking a bunch of hits in a controlled setting to build your stack. For high-level missions, a few enemies may be enough to get you rolling. For mid-level missions, you may need to gather up quite a few friends before the incoming damage is high enough to give you tokens. It’s sometimes useful to build your inoculator components around this assumption. I find that the Blood Balm Salve (20% HP/sec for 20 seconds, red slot) inoculator component can be helpful to provide HP regen before your berserk healing kicks in. If you’re under-capping damage reduction (leaving it below 60% and letting berserk fill out the rest), then I’d suggest using Indomitine (10% hard-capped damage reduction for 20 seconds, yellow slot) or Rosarium (50% hard-capped damage reduction for 5 seconds, yellow slot). These two also double as an emergency button for bosses, since they hard-cap your damage reduction (80%). In any case, you’ll figure out which way you find most comfortable to stack tokens once you get going.

Also, it’s worth mentioning that berserk means you want to be hit hard, at least often enough to trigger your token-generator enchant. Ironically, this can cause problems for low-level missions, since you won’t be taking enough damage to actually stack berserk sufficiently. There are two ways to deal with this: (1) stack another damage source. This might mean another source of bonus damage, leveraging enrage tokens, a means of causing enemies to explode, or vulnerability stacking. It’s your choice, and there’s plenty of options. (2) get creative. A couple players I know simply remove all their damage mitigation and rely on temporary invulnerability to survive. This means even low-level enemies usually can trigger berserk stacks, but beware: if your invulnerability source doesn’t trigger, it’s lights out. There are plenty of tricks you can play.

Berserk can be an entertaining, confrontational playstyle, and its massive amounts of damage and survivability mean it opens up a lot of flexibility in your choice of weaponry (it’s viable for basically anything). That said, please understand that it is something of a broken mechanic right now. It is substantially over-tuned, and Neocore almost certainly will bring it back in line with other things. So go out there, blow things up, and enjoy this little slice of craziness for the moment.